With the exception of 'Sisters' and ofcourse 'Digital' I work on paper in acrylic, pastel and ink.

Sisters is industrial paint on linen.

Digital is on an iPad Pro using multipale apps.

All the photos are taken using Olympus camers. With obvious exceptions I work in Black and White and keep my retouching to a minimum. Namely the type you would imploy in a dark room - dodge and burn, exposure, and cropping with a little spotting .

Everything is shot with natural light.

The Road to Zakros 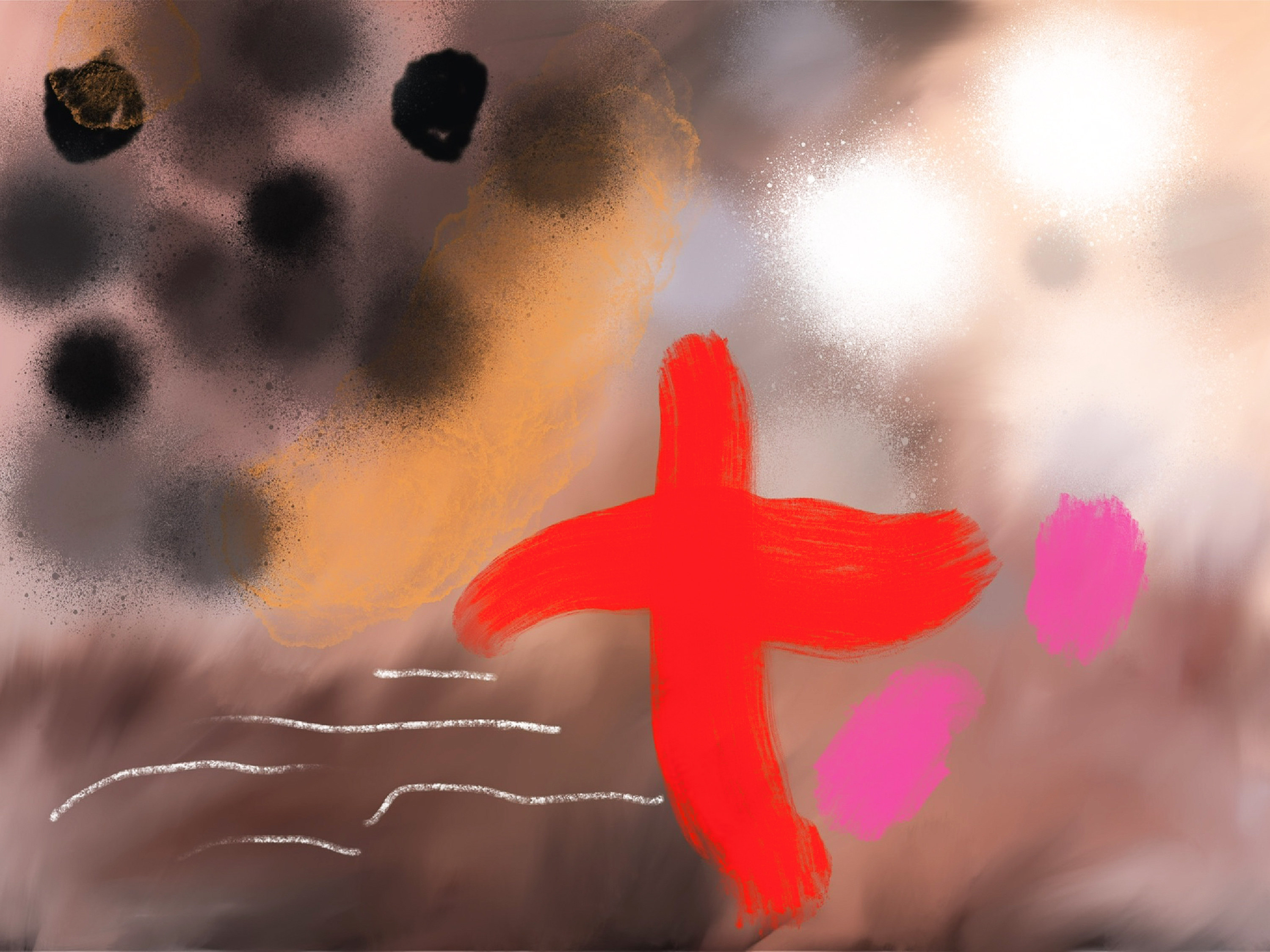 Terry Cripps (b.1951) was born in Tripoli and raised in Singapore, Kenya and St. Ives in Cambridgeshire. He studied at the Cambridge School of Art (1967-71), completing a Licentiate of the Society of Industrial Artists (LSIA). The curriculum introduced students to the requirements of commercial illustration principally in design, illustration and printmaking, but Terry was among the first of that cohort, supported by his then tutor, Geoff Newman, to study the techniques of photography i.

Following graduation, Terry worked for a number of advertising agencies, variously as a designer, art director and creative director both in London and the South West. He began to work as an illustrator and was represented by the Beint & Beint illustration agency. Among their clients who commissioned him were Wolff Olins, Condé Nast, Radio Times, Saatchi & Saatchi, Albert Mead Vickers and Vogue.

Extensive professional experience in commercial illustration also prompted the development of Terry’s paintings, examples of which are presently held in private collections in the United States, Germany and Japan, having been exhibited in both the UK and France. In 2006 he was shortlisted for the biennial John Moores Painting Prize. Re-locating back to London in 2014, the practicalities of a significantly smaller workspace imposed a new method of working. His previous paintings, like those of many abstract practitioners, were large and imposing. A smaller studio meant that creating on such a scale was no longer possible; the exploitation of digital methods in generating images has been a comparatively recent departure. The present exhibition shows this new way of working, with exhibited work typically 10” x 8” in size with the final compositions digitally printed onto aluminium.

Guildhall Abstracted: Responses and Inventions (August 2nd-30th), is an innovative and expansive exhibition. It mediates an artistic response to a personally selected series of paintings from the Guildhall Art Gallery’s permanent collection through apparently contingent pairings and association. But although referencing figurative paintings, some in the “Grand Manner” which span the eighteenth and nineteenth centuries, Terry’s aesthetic looks resolutely forward to the twentieth century and associated avant-garde practice. His inclusion of colourful biomorphic forms and motifs recall the compositional devices employed by Joan Miró and André Masson – iconic Surrealist artists whose revelatory, automatic drawing techniques interrogated the ostensibly fixed vistas of the interwar years.

In similar fashion, Terry’s subtle use of line and form renders the fixed object dramatically fugitive and malleable within typically ambiguous and unfixed spatial settings. In an exhibition review of Miró’s practice penned for the weekly US magazine, The Nation, the modernist American art critic and staunch defender of abstraction, Clement Greenberg (1909-1994), fashioned an analogy to “Matisse’s cold hedonism and ruthless exclusion of everything but the concrete, immediate sensation” ii. Although executed using digital media, Terry’s aesthetic shares with both these painters a tangibly modernist, late romantic sensibility in which extraneous forms are pared down or removed through the refinement of abstraction.

The practice of other, more recent artists is also apparent in a range of compositions exhibited here. Terry’s lyrical approach to colour and elliptical re-versioning of titles recalls the playful sensibility of the late British painter and printmaker Howard Hodgkin (1932-2017). Although there are differences around the deployment of particular colours, as Terry’s palette uses blues, very strong reds, although rarely greens and his abstraction, unlike that of Hodgkin, works to eliminate residually readable objects and subject matter. The other name suggested by Terry’s gestural use of line is that of Cy Twombly (1928-2011), an artist closely associated with American post-war abstraction. In Twombly’s aesthetic, the relationship between abstract form and the picture plane often remains fluid or unresolved. Terry’s compositions situate similar ambiguities in form and ground relationships, demanding close viewing attention to the specificity of the pictorial and spatial effects achieved.

Twombly’s work also marked a transition towards the more robustly conceptual practice of a younger generation which arguably informed the art school ethos experienced by Terry’s cohort in the late 1960s and early 1970s iii. Yet beyond these recognisable antecedents, Guildhall Abstracted demonstrates a more profound cultural truth: how the expressive use of medium can re-fashion the established, figurative genres of history painting, portraiture and landscape into vibrant, relational vistas in which, as the saying goes, futures remain open, contested and yet to be imagined.

School of Arts, University of Kent

i Interview with Terry Cripps by the author, artist’s home and studio, South-West London, July 5th, 2019.

Some personal reflections on practice

As any painter will tell you, the first brushstroke is often the hardest. The blank surface full of promise of what might be is also very intimidating. But even before that moment of commitment, there is that elusive instance regarding the idea itself. Where do they come from? The spark is seen, but vanishes. How do artists keep hold of that moment long enough to work with it, turning it into an expression of confidence and resolution? In many respects that is the ‘hard work’ – its retention in our imagination long enough for the moment to materialise into a confident piece of finished work.

Many artists are perhaps content, even insistent, on working in quiet, white spaces isolated from distraction, so difficult is it to keep hold of that spark within the imagination. I confess I’m of another habit; that of needing the confusion and chaos that is life to present objects, colours and shadows that make up my compositions. I much prefer sitting in a street cafe, bus terminus or railway station with all its vibrancy; teasing out compositions and arrangements that become paintings. I spontaneously draw down shapes, lines and scratches which seemingly have no relevance to the scene in front of me, but which are nevertheless a product of them.

Imagine then that the starting point for a painting is fixed, known, easily referenced by others; what then of the challenge to be original? Some artists over the ages, but more so in the twentieth century, have typically resorted to reworking existing compositions or responding to something internally in order to generate their own practice. Notable examples might include Picasso’s variations on Velazquez’s iconic painting, Las Meninas (1656), but literature and politics have often been integral to this role too. For example, we might think of Goya’s satirical etchings on Spanish society and mores, Los Caprichos (1797/8).

A problem arises for the artist which is one of comparison, one on top of the other. Is the work a new concept or merely the reworking of an old idea? And when the expression has morphed into abstraction, will the dynamics of symbolism and substitution start to interfere with the acknowledgement of the ‘new’? I have tried to remain undaunted by these problems. Namely, using known and respected artworks to stimulate new abstract compositions. Not unlike the gleaning of shapes and shadows whilst sipping coffee. It’s important to say here that these are not interpretations of other artworks or even attempts to represent what they have undertaken, but to use found elements to create my own paintings. Any recognisable dimension within my work is unintentional and coincidental. My practice should sit by itself and not need a starting point. They are merely interesting departures for my own compositions.

Have I shed all the metaphysics contained in the paintings chosen for each pairing? I doubt it, since what was the reason for each selection, say instead of the painting to the left or right. Here we return to the mystery of where things start.

I have used the Guildhall Art Gallery’s collection as my playing field or stage in order to project my own manner of working. Bright, joyful, tantalising compositions of colour and shape, song and mood to please the eye. They explore modernist ideas of form, texture and possibility. They are playful, teasing and perhaps mysterious. In their execution, I cannot deny a conceptual connection, but it’s in the seeing that they should be judged.